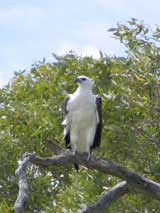 Durras Lake and the Lakesea Park are bordered by the Murramarang National Park. The National Park extends west from the sea to the catchment areas of the Durras Lake, ensuring the Lake and its surrounds are maintained in their unspoilt state, earning Durras Lake the reputation of the most pristine body of water on the east coast of Australia.

The quiet of the National Park is beautiful. The noise of civilisation is replaced by wildlife noise ensuring a most peaceful and tranquil destination. For those who are adventurous there are many bushwalks through the abundant gum and rain forests where you can experience the enormous diversity of native fauna and flora.

The park contains around 200 species of birds, 12 reptile species and 39 native terrestrial mammal species as well as over 400 flora species in various communities.

Listed below are just a few of the more commonly observed shorebirds around Lakesea Park. 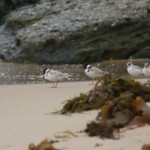 Not to be confused with the common Spur-winged Plover (also known as the Masked Lapwing) the Hooded Plover is an extremely cute little bird, about 17 cm in height, with a white belly, grey wings, a short red bill, a dark black head and a red ring around the eye. It’s favourite haunt is high energy beaches such as main beach at South Durras, where it dashes along the shoreline dodging waves whilst snapping up small flies and other insects. 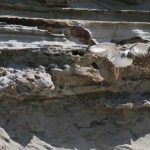 but today the Hooded Plover is only found south of Jervis Bay, where its distribution is scattered loosely along the coast. A recent survey along the coastline located less than 50 of these birds.  Hooded Plovers have declined in number and are threatened with extinction in NSW because they are not raising enough young to replace the adults when they die. 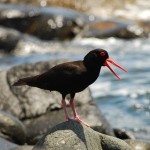 The Sooty Oystercatcher breeds in colonies, with both members of a breeding

pair incubating eggs and caring for the young. They nest in a scrape on the ground among pebbles or shells on rocky shores or cliffs.

The Murramarang National Park coastline has one of the most significant populations of Sooty Oystercatchers in NSW. 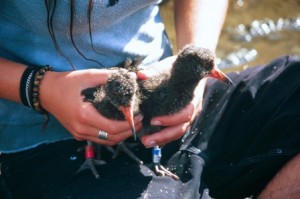 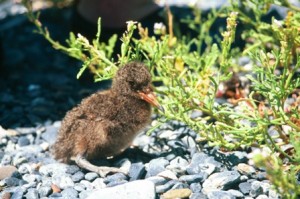 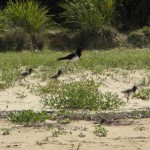 Most people who visit our coastal lakes and beaches notice the Pied Oystercatcher. Often described as the most handsome bird on the beach.  Because of a decline in the numbers of these spectacular coastal shorebirds, they are now listed as endangered.

Pied Oystercatchers favourite nesting spot is on the sand immediately above the beach. Usually close by, is a tidal lake (such as Durras) where the birds can fossick for food such as pipis and other shellfish.

The area north of Lakesea Caravan Park towards the entrance of Durras Lake is prime shorebird habitat, in early spring Pied Oystercatchers nest in this area. 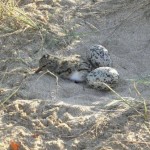 These nesting sites are fenced off to minimise trampling by visitors to the area. We don’t need to close down beaches or ban people from walking on these sand spit areas. All we want to do is provide a small space where these birds can breed safely.

The pied oystercatcher chick to the right is the first hatchling of the 2012 season!!
Photos courtesy of John Perkins.

White-faced Herons are the most commonly seen herons in 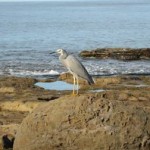 Australia. Locally here in Durras they are often seen along the shoreline of Durras Lake.  White-faced Heron can be found anywhere there is water from tidal mud flats and coastal reefs.  The White-faced Heron feeds on a variety of prey including fish, insects and amphibians.

Food is obtained in a variety of ways, such as walking and disturbing prey, searching among damp crevices or simply standing in the water and watching for movement.